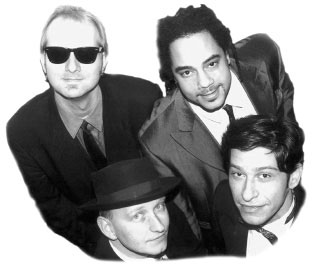 Root 66 is an old concept, but made fresh and modern by its five excellent musicians. Before the days of electric music, there was only acoustic music. No effects, tricks or others bits of modern technology to hide behind. The halls became bigger, the music louder and most of all electric.
What Root 66 tries to accomplish, is to create the original effect those celebrated players had on their audience.
Bringing back the old intimate feeling one associates with blues, gospel and soul. With 2 guitars, bass, snare, hihat, saxophone and an emotional singer Root 66 takes great songs,such as Swing-Songs à la Sinatra, earthy R&B like John Lee Hooker, Rock’n’Roll-tunes from the Beatles, the Stones and Chuck Berry, also soul-classics from James Brown. Their repertoire covers pre-war songs like “Flip, Flop and Fly” or “Nobody Knows You” all the way to Stray Cats and Black Crowes.
- But always playing with respect to the “old” times, when whisky was a dime and the juke-box was not invented.